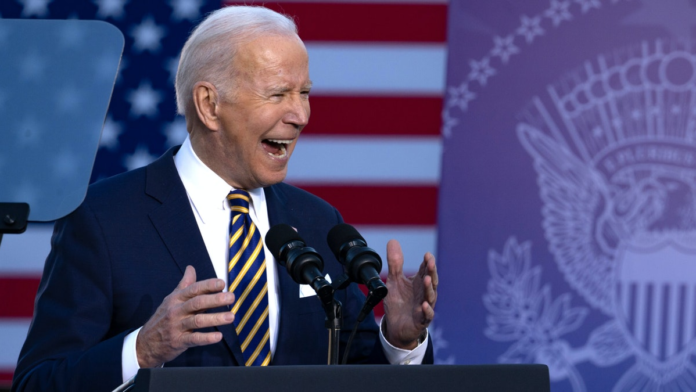 Democrat President Joe Biden’s approval rating in a left-of-center mainstream poll cratered to 33% on Wednesday as Americans grapple with skyrocketing inflation, supply chain issues, a pandemic that Biden has failed to stop, and numerous additional crises.“Americans give President Joe Biden a negative 33 – 53 percent job approval rating, while 13 percent did not offer an opinion,” Quinnipiac University reported. “In November 2021, Americans gave Biden a negative 36 – 53 percent job approval rating with 10 percent not offering an opinion.”Biden’s approval rating from Democrats sank by double digits from 87% in November to 75% in the new poll. The percentage of Democrats who now disapprove of him doubled from 7% to 14%. Only 1 in 4 Independents approved of Biden’s job performance while only 2% (not a typo) of Republicans approved of Biden’s job performance.Biden earned bad scores on major issues, including:the economy: 34 percent approve, while 57 percent disapprove;foreign policy: 35 percent approve, while 54 percent disapprove;the response to the coronavirus: 39 percent approve, while 55 percent disapprove.President Biden’s overall approval rating in the last seven Quinnipiac polls: 49%, 46%, 42%, 38%, 37%, 36%, 33%.— Ryan Struyk (@ryanstruyk) January 12, 2022“A rocky start for President Biden gets him low grades on his year one report card,” said Quinnipiac University Polling Analyst Tim Malloy.“Joe Biden’s historic unpopularity is horrible news for vulnerable Democrats,” NRCC Spokesman Mike Berg said. “He will be an anchor around every single Democrat in the country.”The report added:As President Biden marks his first year in the Oval Office, 50 percent of Americans say the job he is doing is about what they expected, 39 percent say he’s doing a worse job than expected, and 7 percent say he’s doing a better job than expected.A plurality, 49 percent, say Biden is doing more to divide the country while 42 percent say he’s doing more to unite the country.Roughly 4 in 10 Americans (41 percent) think Biden is too liberal, 38 percent say he’s about right, 9 percent say he’s too conservative, and 12 percent did not offer an opinion.Polls from over the last couple of months have shown that Republicans are on track to have a dominant showing in this midterm elections.Biden was widely criticized over a speech that he gave on Tuesday that was panned as divisive.“Twelve months ago, a newly-inaugurated President Biden stood on the West Front of the Capitol and here’s what he had to say: ‘My whole soul is in this: bringing America together, uniting our people, and uniting our nation,’” Senate Minority Leader Mitch McConnell (R-KY) said. “Yesterday, the very same man delivered a deliberately divisive speech that was designed to pull our country farther apart.”“Twelve months ago, this President said we should ‘see each other not as adversaries, but as neighbors.’ Yesterday, he called millions of Americans his domestic ‘enemies,’” McConnell continued. “Twelve months ago, this President said that ‘disagreement must not lead to disunion.’ But, yesterday, he invoked the bloody disunion of the Civil War, the Civil War, to demonize Americans who disagree with him. He compared a bipartisan majority of Senators to literal traitors. How profoundly, profoundly unpresidential.”The Daily Wire is one of America’s fastest-growing conservative media companies and counter-cultural outlets for news, opinion, and entertainment. Get inside access to The Daily Wire by becoming a member.

News all in one Place. A conservative News Aggregation website

This website uses cookies to improve your experience while you navigate through the website. Out of these, the cookies that are categorized as necessary are stored on your browser as they are essential for the working of basic functionalities of the website. We also use third-party cookies that help us analyze and understand how you use this website. These cookies will be stored in your browser only with your consent. You also have the option to opt-out of these cookies. But opting out of some of these cookies may affect your browsing experience.
Necessary immer aktiv
Necessary cookies are absolutely essential for the website to function properly. These cookies ensure basic functionalities and security features of the website, anonymously.
Functional
Functional cookies help to perform certain functionalities like sharing the content of the website on social media platforms, collect feedbacks, and other third-party features.
Performance
Performance cookies are used to understand and analyze the key performance indexes of the website which helps in delivering a better user experience for the visitors.
Analytics
Analytical cookies are used to understand how visitors interact with the website. These cookies help provide information on metrics the number of visitors, bounce rate, traffic source, etc.
Advertisement
Advertisement cookies are used to provide visitors with relevant ads and marketing campaigns. These cookies track visitors across websites and collect information to provide customized ads.
Others
Other uncategorized cookies are those that are being analyzed and have not been classified into a category as yet.
SPEICHERN & AKZEPTIEREN
Zur mobilen Version gehen